How to become a champion investor—and punch above your weight 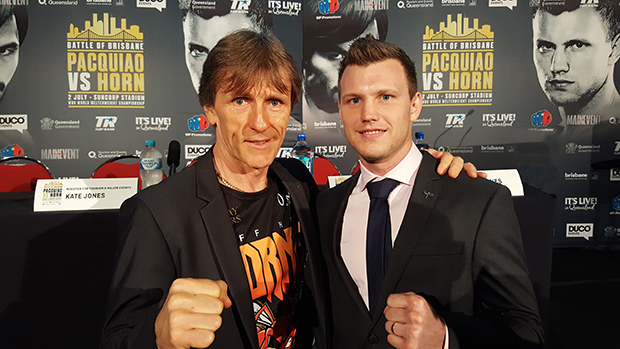 Glenn Rushton, Executive Director of Rushton Financial Services, is also the trainer and manager of Olympian, Jeff “The Hornet” Horn, who became the WBO World Welterweight Boxing Champion by defeating 11 times world champion and Fighter of the Decade, Manny Pacquiao, in Australia’s biggest ever boxing match on 2 July 2017 at Brisbane’s Suncorp Stadium. Glenn shares a unique insight into Jeff’s boxing career, and at the same time, offers some important tips that apply equally to both investing and the noble art of boxing.

1. You must have a burning desire to succeed.

Success starts with desire. To be a champion boxer or investor, you have to want it bad, really bad – wishing is not enough. After more than four decades as an elite athlete and coach, I often tell young boxers, “I can teach you everything you need to know to be a world champion – but I can’t make you want it. I will bring all the knowledge, but you must have a burning desire to succeed, and be prepared to work hard and do whatever it takes.”

Whether you want to be a world boxing champion, or retire on an income of $300,000 a year or more, it must be so important to you that you will do whatever it takes to achieve your objective, even if that means slugging it out on a bag until your lungs are bursting, or enduring the inevitable tough times that come in the world of investing, it is the burning desire to succeed that will keep you going when most others are throwing in the towel.

2. You must develop a carefully thought out plan to succeed.

Once you decide on your objectives, you must find a realistic way to achieve these objectives. If you aim at nothing – that’s exactly what you’ll get. Let’s face it, to achieve financial freedom, you need to have a disciplined savings plan, and a great investment strategy, that you stick with through good times and bad. There are no certainties in boxing or investing, but you can dramatically tip the odds in your favour, if you create a plan with knowledge and precision. With Jeff, I crafted a carefully thought out ten-point plan to beat Manny Pacquiao and make Jeff champion of the world. Even before Jeff had his first fight, I told him I believed I could get him to the Olympics in four years, and then 3-4 years after that, I could make him a world champion, and, if all went according to my plan for him, he could retire in his mid-30s as a very wealthy man. I told him that it would not be an easy road, and that this dream was only possible for some – and that he was one of them. I do the same with investors, discussing a carefully constructed plan that will give them the best possible chance to achieve their investment objectives. I explain the strategy carefully, and break the plan down into logical steps, that will take an investor from where they are now, to where they want to be. It’s about distilling an incredible amount of knowledge and experience into a workable plan that is designed to navigate the inevitable adversity that investment markets present on a regular basis.

3. You need to think long term.

Many boxers are too worried about winning every amateur bout, and, as a result, they take too long to reach their potential. In the end, age usually beats them. Jeff was 20 before he had his first bout, and time was important, so I stepped him up quickly. I was less concerned about whether he won in the early days, and more focused on achieving our long-term objectives. Jeff fought in the State Titles in his second fight (which he won) and the National Titles in his fourth fight (which he lost), however, he did go on to win the next three National Titles, and he fought for a medal in the quarter finals at the 2012 London Olympics – the best effort by an Australian boxer since 1992. Investors also need to remain focused on their long-term objectives, and understand that, like Jeff, you may have to endure a few bumps along the way, but if the plan is sound, you will get there in the end. One of the major reasons people never achieve their financial goals, is that they keep chopping and changing, moving from one investment to another. Success requires focus. In the investment realm, the focus should be on achieving good long-term returns in accordance with your objectives, as we’re all investors until the day we die.

4. Good risk management will enable you to avoid big hits.

Many boxers are more interested in attack than defence. These boxers tend to have short careers, and rarely become world champions. Great boxers understand the critical balance between attack and defence and pay equal attention to both. Boxing is known as the ‘sweet science’, and investing is also a science – and just as sweet, when executed correctly. I teach boxers perfect defence, as well as perfect attack, and remind them never to get careless, as that’s when they’ll find themselves on the canvas. I do the same with investors, always explaining why risk must be managed very carefully, whilst pursuing achievable returns that will enable them to reach their financial goals. In boxing, we remove every risk we can, and carefully manage those that can’t be removed. Investors need to do the same, and in the Rushton All Seasons Fund, we adopt a ‘risk-first’ approach and go to great lengths to remove unnecessary risks.

5. You need a great team in your corner.

I told Jeff early in his career that he couldn’t become a world champion on his own. He needed a great team behind him – me to train and manage him, his wife and family to provide their emotional support, his sponsors to provide financial support, his promoter to arrange the fights for him, a great medical team of physios, massage therapists, doctors, etc., and our expert corner team on fight nights. It takes a great team to make a world champion. The same applies to investing. It takes a good investment manager, a good accountant for tax purposes, good lawyers for structuring and estate planning, etc. You can’t be an expert at everything, so you need to build a winning team around you. If you do, you will have the support that you need to achieve your financial goals. We have been helping, coaching, and managing money for investors for many years, and often we find those that think that they have everything all sorted, are the ones that need the most assistance, as they’re often not aware of the risks they’re taking.